If you are on the lookout for information on French drain installation, then you have come to the right article. There are a number of things to learn about the topic, and it is highly important that you know the basics before making any attempt at French drain installation. A lot of people are still pretty much unfamiliar with French drains, what they are for, and where as well as how they are installed. To avoid serious problems, brushing up on your knowledge on the subject is a must. First of all, what is a French drain? It is a device that works to remove excess water from excessively wet areas or low spots in the lawn. 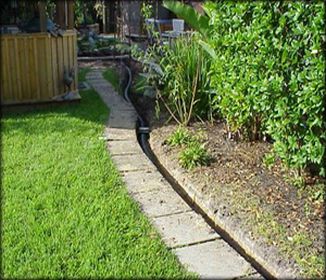 French drains are often situated behind a house, usually at the end of a slope where excess water is directed to an area of the lawn that’s almost level. It is not uncommon to find a French drain in the basement—the basement, after all, is usually the flooded part of the house—but sometimes you can find French drains in wet areas along a property line that has two adjoining lots graded separately. Wherever you may find a French drain, you can be sure that the goal of every French drain installation is the same: to move water away from the moist, soggy area.

The first type is called the interior French drain, which is recommended for those who have leaking problems concentrated in just one area of the basement or along just one side of the house. An interior French drain installation normally takes more than a day, even a couple of days, to install. A sump pump as well as a sump pump pit, where the water will be sent, will be necessary to achieve the task.