Cost of French Drain: The Breakdown 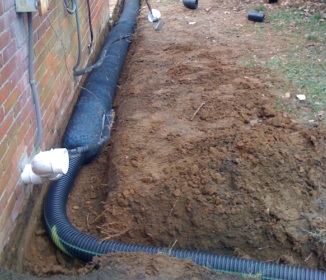 Why bother finding out about the cost of French drain? If you are a homeowner who wants to keep the yard and basement devoid of moisture and excess water which can provide damage in the future, then installing a French drain is one of the things you must consider.  What is a French drain?  Not only would you avoid pools of water with it but you will also be able to save more money than spend them on repairs and renovations caused by damages done by water and moisture.

Okay, so now you have found out that French drains are great to be used as yard drainage solutions and that they are trenches filled with pipes that can drain excess water away from the perimeter of your home.  However, there is still one thing which concerns you as a homeowner: the French drain cost.

Cost of French Drain Part 1 – The Difference in Costs

Since there are two areas where you can install French drains, namely interior and exterior; there are also differences in the costs to have them installed.

Installing an interior type of French drain is usually applied in basements where water can possibly enter because of the basement being underground.  The approximate cost of having a French drain installed in interior areas would be about $3,000 to $4,000.

Exterior French drains are most commonly found on the outside walls of structures and in yards or gardens.  Since most of the French drains installed in exterior means would involve a lot of digging and would sometimes cost more materials, the exterior installation cost of French drain systems would revolve around $9,000 to $15,000.

In anything involving construction, there is also a certain amount allotted for the labor done.  If you are having professionals do the work, then there would definitely be added costs.  However, if you are willing to put in the effort to dig around the spots where you would like the French drain installed, then the costs would be cheaper since you would only have to compute for the cost of the materials.

If you require more information, please visit the following sites that are authorities in this topic…